Looking into your pale eyes
As they sparkle with your smile,
Our faces just inches apart as we laugh and chat.
Do you read what is written in my eyes
Do you see the hidden desire

Do you have any idea
Of the calm turmoil
You create within
Your touch, your smile
These things I crave so much

Do you want it too
A time and a place
Where we can share
Much more than
A simple kiss
Posted by Lady in red at 11:43 2 comments:

As I stood leaning over the 4ft barrier he slipped his hand inside my blouse, when I didn't object too much his fingers ventured further. Sliding his hand inside my bra grabbing a handful of warm flesh. All the time talking dirty, making me laugh. My high visibility bomber jacket whilst too small for me was still enough to hide his actions from those within sight.

I could and perhaps should have not only objected to him touching me up in this way, but put in a formal complaint. I did neither. Whilst I didn't actively encourage him neither did I forcibly discourage him which makes me as guilty as he. The line though was firmly drawn when he made to undo the zip on my trousers. Bad enough that I had allowed him (much to my own astonishment) to fondle my breast, I was not going to allow him inside my trousers. Perhaps if we had not been at my work place things may have been different but I doubt it.

This man who I refer to among my colleagues as 'the dirty old man'. He calls me up at times for no other reason than just to talk dirty. He talks the same way to my colleagues but mostly to me. He knows I have my naughty side and he tries to draw me into being naughty. He is single he is local he is very well off (in comparison to me that is). He is extremely cheeky. He is a an important contact. I cannot afford to upset him, however this is not why I allowed him to molest me. Thinking about it as I strode back towards my office I realised that I have actually become a little fond of the naughty man.

I was also a little warm after the experience which was not really unpleasant. I realise that I actually enjoyed being handled, probably because it has been so long since I was touched like this.
Posted by Lady in red at 19:02 1 comment:

Labels: being touched up at work, Garfield

When a joke isn't taken that way

Having another blonde moment I left my phone at home today. On my return I had a couple of text from The Man aka Kama (as of now). I also had about 5 emails, one of which said that he had missed hearing from me. Another was a fantasy/nightmare that he had written for me. To check it out go here.
Posted by Lady in red at 06:57 6 comments:

Yesterday the lovely FireByrd sent me an email about ICE

Message from the Ambulance Service

We all carry our mobile phones with names & numbers stored in its memory.. If we were to be involved in an accident or were taken ill, the people attending us would have our mobile phone but wouldn't know who to call. Yes, there are hundreds of numbers stored but which one is the contact person in case of an emergency? Hence this 'ICE' (In Case of Emergency) Campaign.

The concept of 'ICE' is catching on quickly. It is a method of contact during emergency situations. As mobile phones are carried by the majority of the population, all you need to do is store the number of a contact person or persons who should be contacted during emergency under the name 'ICE' ( In Case Of Emergency). The idea was thought up by a paramedic who found that when he went to the scenes of accidents there were always mobile phones with patients but they didn't know which number to call.

He therefore thought that it would be a good idea if there was a nationally recognised name for this purpose.

In an emergency situation, Emergency Service personnel and hospital Staff would be able to quickly contact the right person by simply dialling the number you have stored as 'ICE'. Please forward this. It won't take too many 'forwards' before everybody will know about this. It really could save your life, or put a loved one's mind at rest.

For more than one contact name simply enter ICE1, ICE2 and ICE3 etc

Being the good blogger/friend/citizen that I am I emailed this to people on my contact list for the email account I had received it on. I will get around to sending it to people on my other contact lists soon. In the mean time here it is for anyone who has not seen it.

This afternoon I went to the gym then visited my mum. On my return home I checked my emails and was just about to delete all the ones I don't need when I realised there was one from GB aka Jasper in reply to my ICE email. I really hadn't expected to hear from him. It has been a long time since we last had any contact. It was only a very brief email, clearly he has not forgotten me although it is now two years since we were having our brief fling.

It was in my days on AFF (adult friend finder) Jasper was one of the men I met. He was married had never played away from home. His innocence made me laugh. He was such a sweetie. A successful businessman from a local City. His business is in the luxury end of the leisure industry. To my amazement when we first chatted he was not keen on the idea of meeting in hotels (that would be too sordid for his taste). He wanted to buy a house in my town which would be our love nest. At the time I was having trouble with cluster headaches some of which were caused by my car (not only no powersteering but very stiff wind down window which jarred my neck). He wanted to buy me a new car!!

I did manage to persuade him that he was being impractical.

When we met for the first time it was for a coffee in town. Jasper has the most delicious cheeky grin. I couldn't help getting swept up in his infectious enthusiasm. His gentlemanly charm, the efficient businessman and the gentle naive man that I knew him to be were all part of the attraction for me.

After several attempts to spend more time together we finally managed to be together in a hotel dangerously close to his home. Our time together was so special that we both felt elated for the next 24 hours until the guilt of his betrayal hit him. A few days of soul searching later he wanted to continue to see me but keep me at arms length so to speak as he couldn't afford to become too attached to me. It was then that I felt I had to let him go even though it was so hard to do.

Whilst writing this post I received a further email from him. I have not replied, as much as I would love to renew his aquaintance I do not think it would be wise.
Posted by Lady in red at 19:27 1 comment: 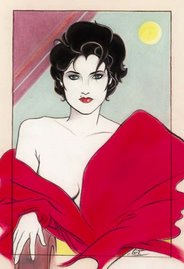